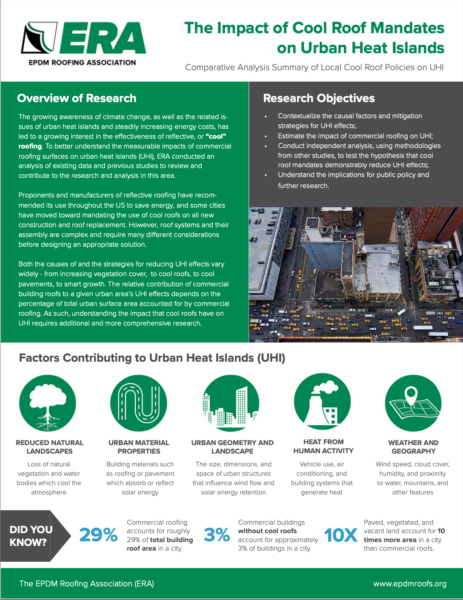 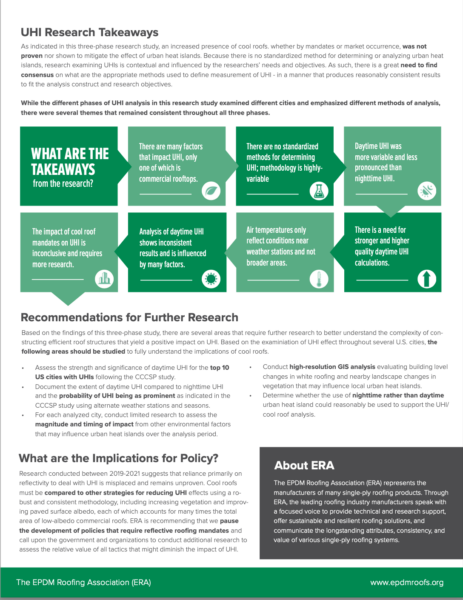 Since its founding almost 20 years ago, the EPDM Roofing Association (ERA) has been committed to providing science-based information about our products and their optimum use. Given the ongoing and intensifying efforts to lessen the impact of climate change, three years ago ERA instituted a portfolio of research projects to investigate the role of commercial roof systems in those efforts. Our first project focused on the urban heat island effect (UHI), attempting to measure the efficacy of reflective or “cool” roofing as a mitigation strategy against UHI. ERA members manufacture both reflective and nonreflective membranes, and we owe it to our customers to recommend the most effective use of our products to diminish the impact of UHI.

To conduct our research, ERA contracted with ICF, an independent consulting firm with experience in climate change, data analysis, and building science. ICF undertook an analysis of existing data and previous studies on Urban Heat Islands (UHIs), with specific focus on the measurable impacts of the roof albedo of low-slope roofing.

ICF’s analysis of temperature data for cities with cool roof mandates found no discernable correlation between the imposition of cool roof mandates and a reduction in UHI when compared to similarly situated cities without such mandates. To be clear, this lack of measurable impact did not support the conclusion that no such correlation exists. But our study instead revealed that complex and inconsistent temperature assessment protocols are being utilized in virtually all UHI evaluations, making comparisons of efficacy problematic.  ICF’s analysis suggests that the number and quality of weather stations available for this research may not have been sufficient to validate the extent that UHI exists in a given geographic location. In other words, the two-year work effort of ICF has determined that the presumed real world behavior of urban temperatures and reflective roofs could not be verified due to the existing uncertainty in measuring the very factors that reflectivity allegedly helped to cure. The bottom line is that decisions about mitigating the impact of UHI are being made based on assumptions, rather than on scientifically measurable data. Reliance primarily on reflectivity to deal with UHI  remains unproven.

Prudent building science requires us to call upon the federal and state governments to conduct additional research to assess the real world relative value of all proposed solutions that might actually diminish the impact of UHI. Cool roofs need to be compared to other strategies for reducing UHI effects using a robust and consistent methodology. These strategies include increasing vegetated area, urban tree canopy, and increasing paved surface albedo, each of which accounts for many times the total area of low-albedo commercial roofing. It’s time to invest in research that will prescribe an appropriate balance of mitigating tactics to blunt the impact of UHI, and help ensure a productive future for American cities and the people who live and work in them.

An overview of the research project may be seen in the pdf link at the top of the page.